The Benedictine Sisters of Florida are among several Orders that participated in the Global Sisters Report article (an international publication) regarding life during Covid-19.

Shut up at home by pandemic,

Sisters find world is still with them

After months of emergency shutdowns, staged reopenings and, in some cases, reversals, sisters are finding ways to cope with the inevitable COVID-19 anxiety, brought on by months under virtual lock and key.

No, they aren’t congregating in gyms, bellying up to the bar or having unmasked beach bonfires. Surprised?

Instead they are sewing masks for frontline responders. Scheduling extra prayer time for those suffering from the ravages of the virus. Ringing the monastery bell to remind townspeople to pray in a pandemic-stricken state.

But women in orders are also finding lockdown escapes that would sound familiar to the rest of us. They include in-house movie nights, long walks, check-in calls with friends and acquaintances, the occasional sweet treat and even popular novels.

Their “steady as she goes” approach does not mean that they have been left untouched. As GSR chronicled, some religious communities, such as the Felicians, have had numerous deaths. Elderly members reside in nursing homes where visitors, including fellow sisters, are restricted or banned outright.

In the meantime, women religious are finding ways to connect with others and have fun at the same time, even while maintaining the recommended social distance.

When nuns are looking for outlets, said Sr. Anne Lythgoe, a member of the Columbus, Ohio-based Dominican Sisters of Peace leadership team, they gravitate toward doing more of what they like to do already, whether that is gardening or listening to classical music.

“You go to things that give you life,” she said. Lythgoe, a potter, has been spending more time in her artist’s studio.

Members of her community have also been making masks, as well as providing food assistance, said Lythgoe. Though the pandemic has been “overwhelming, and everyone has had to adjust to a new way of living,” she added that sisters, like everybody else, find a sense of balance by looking outside themselves.

In Los Angeles County, the Daughters of St. Paul (already known as the “media nuns”) moved to “adapt our ministry right away,” said Sr. Rose Pacatte. It did not take long before the seven sisters in her house began to livestream their holy hour and participate in online Masses with consecrated hosts provided by priest friends in neighboring parishes.

“I felt like I was praying in union with the larger church,” said Pacatte, adding that washing her hands has become a ritual and a moment for prayerful reflection.

She would say two Hail Marys for the intentions of those asking for prayer, Pacatte wrote in an email. “Sometimes it was about 50 Hail Marys,” she recalled. “Now, when I pray the Hail Marys as I wash my hands, it’s so people will wear masks, be non-violent in their work for racial justice, and for wisdom for our leaders.”

Perhaps it’s the pandemic effect, but Pacatte said she is now a rosary enthusiast. “I was never a big rosary person, but it became my prayer of comfort.” She has also launched a prayer group on Facebook for Dr. Anthony Fauci, director of the National Institute of Allergy and Infectious Diseases.

With the help of Holy Cross Family Ministries, which donated thousands of the devotional items, the Culver City, California-based Pauline sisters launched a drive-through rosary giveaway from their bookstore parking lot for 10 days in May.

At the suggestion of the Pauline mission advancement director, Sr. Tracey Dugas, sisters in the order have picked up the phone, checking in with local connections. Though Dugas left the fine points to the sisters, in Culver City, “we printed out the info of our bookstore patrons, lay cooperators and benefactors and divided the pages among us,” said Pacatte in an email. Sometimes the conversations would be so lengthy that she would make it through just eight of the names on her list, she said.

But the sisters also found time to watch movies like “Emma” twice a week, go for walks in the neighborhood, and make raspberry lemonade cake “to die for, from scratch,” Pacatte added.

Contacted in Chicago, Dugas said that, despite the trauma of the past months, which included the looting of their local bookstore, “a lot of grace came from this time and people grew in communion with one another.”

Sisters changed their schedules so that they could eat lunch together. “Each sister took on things that relaxed them.”

For Dugas, that was the art of lettering (she’s got almost 6,000 followers on Instagram, where her moniker is @sistah_tee_letters). Others took on long-deferred projects from to-do lists, like moving furniture or cleaning up files.

Navigating the twists and turns of a work life lived largely online — she works with two computers on her desk — hasn’t been easy for Sr. Marguerite O’Beirne, a member of the Order of St. Francis in Aston, Pennsylvania, where she serves as the vice president for mission and ministry at Neumann University. “I never thought I would live that long,” joked O’Beirne, about the dual computers, commenting that she grew up in Ireland without a phone.

The sisters in her order, both active and retired, sent out welcoming notes to approximately a thousand students arriving in the fall, she said. In Palmer Method handwriting, of course.

Staff in a local hospital respiratory therapy department were invited to spend nights at the convent’s spiritual center. Sisters sent them meals and cards expressing their gratitude, said O’Beirne.

The sisters, who have the privilege of living in a safe environment, are dedicated to supporting those who are putting themselves at risk, she said.

At the motherhouse of the Presentation sisters in San Francisco, the community, which ranges in age from 76 to 100, has crafted more than 300 masks, said Sr. Rosina Conrotto. With no in-house Mass available, they have been watching it on television and listening to TED talks on aging, said Conrotto, the director of the Office of Consecrated Life for the San Francisco Archdiocese. Men in religious communities, like the Capuchins, have also been engaged in sewing masks, she said.

“I don’t bake, but there are some novels I’ve wanted to read, and I’m catching up on some spiritual reading,” as well as taking a break by listening to classical and country music, and watching a few Turner Classic Movies on the side, she said. In her relatively rare moments of downtime, Conrotto admits to a fondness for mysteries and courtroom dramas.

With public worship suspended for the time being, nuns at the Carmelite Monastery of Baltimore have taken to Zoom, both to participate in annual meetings of their larger Carmelite community and to share vespers and Saturday afternoon lectio divina (reading and reflection) on the next day’s Gospel passage, said Sr. Judy Murray, a member of the community.

At another Carmelite monastery, this one across the country in Carmel, California, much of the day is spent following the traditional horarium of worship, work, recreation and study. The sisters at the Carmelite Monastery of Our Lady and St. Therese don’t have television but are able to access news through newspapers and phone calls, said Mother Teresita, who is the community prioress. “We’ve got shelter-in-place down,” she joked, but added that they are very conscious of what is going on in the outside world.

“We are aware of the unrest, and we continue to live our lives in union with God, uniting all this suffering with Christ and, hopefully, praying for peace. The best we can do is pray. What is more powerful than prayer? That is why we are called to this vocation,” she said.

At Holy Name Monastery in St. Leo, Florida, monastery sacristan Sister Elizabeth Mathai is one on a team of Benedictine sisters who ring the outside Angelus bell every day at 3 p.m. They do this to remind the townspeople living in one of the national COVID-19 “hot spots” that the sisters are praying for them and for an end to the pandemic.

“I really do believe all things are possible with a little help from heaven,” Benedictine Sister Miriam Cosgrove said, but admitted that she was so disheartened by the prevalence of the virus that she doesn’t listen to the news.

When it gets overwhelming, she said, she heads outside, to the fish farm (the sisters raise tilapia, a nod toward economic and environmental stability, they say) and their vegetable garden. “I look around to see what’s come to life each day.”

But apart from two sisters who work outside the monastery walls, the Benedictines, who furloughed their staff with pay, only leave for doctors’ appointments, said Sister Roberta Bailey, the prioress. “We are cleaning bathrooms, scrubbing floors and cooking.” 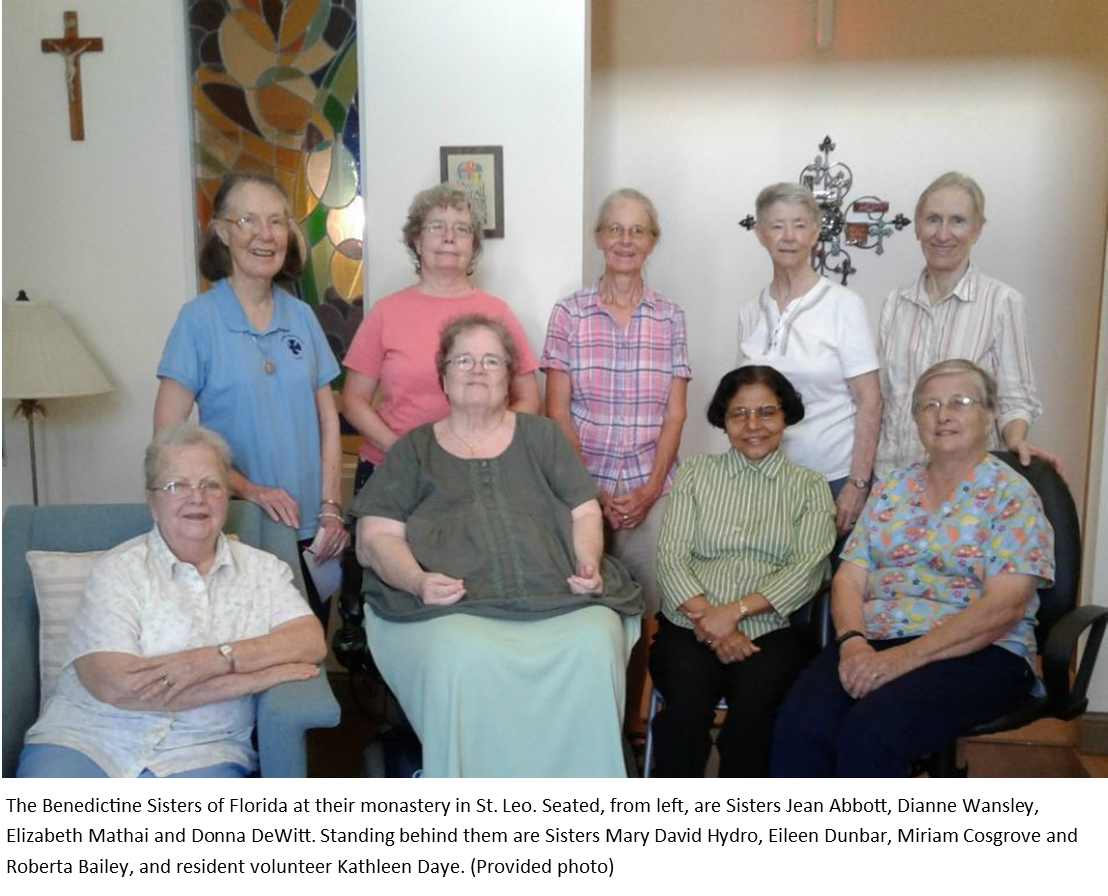 Every Sunday night is still game night, she said. “Routines keep us together.” She now has more time for her hobby of cross-stitching and for reading, both spiritual and fun, she says.

Some sisters can’t wait for their favorite teams to take the field again.

Like legions of sports-starved fans across the country, many are missing the chance to root for their favorite players (or horse). GSR’s North American sister liaison, Michele Morek, an Ursuline Sister of Mount St. Joseph, Kentucky, confessed that community members at the motherhouse were disappointed about cancellation of this year’s Kentucky Derby, as well as the chance to bet on the NCAA basketball brackets.

In the pre-pandemic era, “we all made a ‘donation’ of $2 and our director of communication would send out bracket forms, which we would fill in and send back,” she wrote in an email. “He would give us updates every day, with which sisters had how many right at the time … and the one that got the most right at the end got all the money.”

At the moment, wrote Morek in an email last week, she’s watching the Kansas City Royals out of solidarity with her housemate, an “avid” fan, and eagerly awaiting the advent of football season.

Though many sisters have been pressing for social change during this unsettling time, few seemed daunted, either by the uncertainties of the lockdown or the weeks of protests.

Both male and female religious communities in Conrotto’s area of San Francisco are being conscientious about following directions, from social distancing to handwashing, she reports. “It’s part of our vow of obedience. We are very careful.”

While sisters spend a lot of hours in prayer and assisting others, their advice for staying sane amid all of the crazy also has a distinctly down-to-earth, even a hopeful, tone.

Tend your garden. Bring a neighbor a meal. Don’t fret about what might happen, but do something concrete to change the world, like addressing racism in your workplace, advised Baltimore Carmelite Murray, advocating a focus on beauty, goodness and truth.

“Generally, women religious are in it for the long haul,” said Lythgoe, the potter in Ohio. “They know that things will ultimately get better, and that the arc of history does move towards justice. We can say a lot of things. It’s what we do that speaks to people.”

~Elizabeth Eisenstadt Evans is a freelance writer specializing in religion coverage. She is a frequent contributor to Global Sisters Report.