Today we get a different, maybe a little amusing image of Jesus – Jesus the housekeeper.  How do you know when it’s time to clean house, to clean your space?  Maybe you’ve become aware that the cup supply in the dining room is getting low and you come to the realization that YOU know where the missing cups are.  Or you’ve had that library book on your desk for a year or more.  Or what about the stack of valuable handouts from 2014?  Or your laundry hamper won’t hold one more sock.  Or there are enough dust bunnies under your bed to help God create another person from dust.  And, what about your Lenten resolutions?  Are they the same ones you’ve recycled year after year or do you discern the signs of the times and sweep with Jesus’ “whip of cords”? 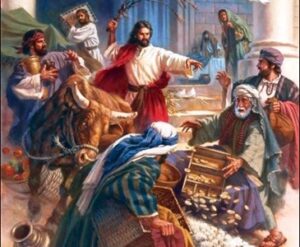 This story from John’s Gospel is about a day when Jesus did some housecleaning in the temple.  It’s a pretty famous story, they say, of Jesus’ anger yet none of the gospel writers actually use the word “anger.”  The word used translates closer to “consumed with zeal.”  And have you noticed when the evangelists speak of this and similar occasions nobody else seems to be upset.  Jesus is the only one who’s acting out.  And when the crowd, his naysayers are riled up, Jesus remains unruffled.  John really doesn’t say Jesus was angry.  He says his disciples recalled the scripture verse: “Zeal for your house will consume me.”

What can we learn from this?  First, we have to understand that anger is an automatic response that rises up in us.  Rightly directed anger can serve a good purpose; it’s a call for change.  If we stuff our anger, and blow up later at someone who has no clue what set us off, who’d want to be our friend?  You won’t find a proverb in Scripture; and nowhere in the Rule of Benedict does it say: “Don’t get angry.”  One of Benedict’s Tools of Good Works tells us: “do not act in anger” and in the Prologue he cautions: Keep your tongue free from vicious talk and your lips from all deceit … let peace be your quest and aim.”

To understand Jesus’ action that day in the temple, it helps to have an understanding of how important motivation is.  It was not wrong for the merchandisers to sell animals and doves.  Nor was it wrong to change money.  That was helpful to the people who came unprepared to the temple.  They’d grown to depend on the availability of such services.  Much like people today have come to expect businesses to take credit/debit, on-line payments.  Sit up and take notice:  no one stopped Jesus when he used his whip of cords: not the temple guards, not the priests, not the sellers, not the buyers, not anyone.  And the Gospel writer doesn’t say Jesus did bodily harm to anyone.  He overturns tables, He spills the money and He swings the whip of cords and scatters THINGS.

Everyone present, except maybe the disciples, seem to overlook the display.  They’re like a child who has witnessed the fury of a disappointed parent.  Then reaches out to take mom’s hand, looks up calmly and asks: “So, Mom, are we still going to McDonald’s?”  The Jews do ask, “What sign can you show us for doing this?”  The disciples must have shaken their heads in amazement.  What does that have to do with what just happened???”  They’d remember later, when Jesus was raised from the dead, what he had said on this occasion.  But for today, all the Jews wanted to know was by what authority Jesus interrupted the activity in the temple.  They didn’t ask why Jesus cleansed the temple because they knew they were guilty of wrong-doing.

John tells us in the days after Jesus display of authority, many began to believe in his name.  But still he did not trust Himself to them.  It is to us that He entrusts Himself, in Word and Sacrament.  He trusts us to act in moral outrage against injustice, abuse and violence.  To pay attention to the needs around us, of God’s people.  To be aware when are we asked for action beyond a petition at Mass.  When He asks, will we be ready for action?  Will He find cause to do some clearing and cleaning?

In one of the Narnia chronicles by CS Lewis’ The Lion, the Witch, and the Wardrobe, the story reminds us that the

divine-human struggle is neither tidy nor tame, but it is nonetheless one that we can live with in confidence.  The story’s characters, Susan and Lucy, ask Mr. and Mrs. Beaver to describe Aslan (Lewis’ representation of Jesus).  They ask if Aslan is a man.  Mr. Beaver replies, “Aslan a man?  Certainly not.  I tell you he is the King of the wood and the son of the great Emperor-beyond-the Sea.  Don’t you know who is the King of Beasts?  Aslan is a lion — the Lion, the great Lion.”  “Ooh!” said Susan.  “I’d thought he was a man.  Is he — quite safe?  I shall feel rather nervous about meeting a lion.”  “That you will, dearie, and make no mistake,” said Mrs. Beaver, “if there’s anyone who can appear before Aslan without their knees knocking, they’re either braver than most or else just silly.”

After the cleansing of the temple entryway Jesus disappeared for a few hours.  The witnesses might have lost some sleep trying to figure out the meaning of it, but they set out once again looking for him – asking for more signs and looking for miraculous bread.  Jesus tells them there will be no more signs.  It’s time to wake up and “read the signs.”

Kindly remember us in your thoughts and prayers.

END_OF_DOCUMENT_TOKEN_TO_BE_REPLACED 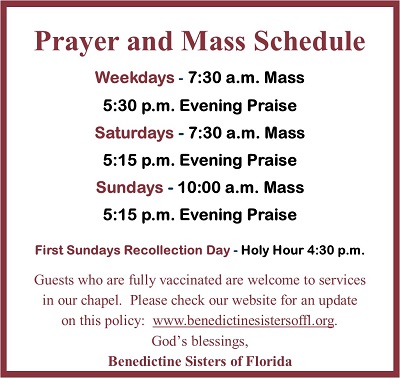